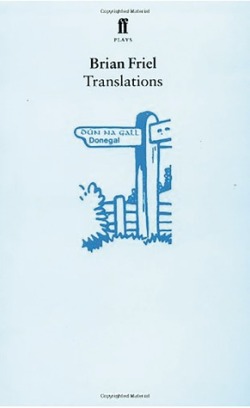 Translations, set in a fictional Donegal village in 1833, is a play about a 19th century Ordnance Survey wherein a mass Anglicization of Irish-Gaelic place names occurred. This cartography project sets the context for Friel’s narrative, a story which, for its many layers, is ultimately a bold examination of the function of language.

The characters in the play, a group of students who attend a local hedge school, speak only Irish. In actuality the actors on stage are speaking English, and when English-speaking soldiers arrive, the audience is meant to infer that the two parties are unable to communicate. The multilingual Irish schoolmaster and his two sons exist at this intersection of language and culture, and the liberties they take in translating back and forth remind us that translation isn’t a wholly linguistic effort: it’s a complex process in which meanings become twisted and manipulated.

Though the students speak very little English, they fluently read Latin and Ancient Greek, this integration of dead languages paralleling the probable future of Gaelic. It also provides a delicate subversion of the traditional colonial narrative which hinges on the conqueror imparting culture upon the ‘barbarians’ – in Friel’s play, the Irish are the educated, the multilingual, the classicists. The function of English then becomes one of eradication rather than enlightenment.

In examining Ireland’s complex socio-linguistic history, Translations is a fascinating look at colonization, English imperialism, and the function of language as a tool that’s at once manipulative, restrictive, and liberating. Although this is a play whose themes are perhaps more interesting than the story itself, the characters are all endearing, and the plot, though slow-moving, keeps you engaged through its conclusion. A challenging, erudite, and moving work. I’d love the chance to see this performed live some day.

Written in 1980, this play was the first production by the Field Day Theatre Company, a collaboration between Friel and Irish actor Stephen Rea.  It was also adapted as a radio play for BBC Radio 4 in 2010.