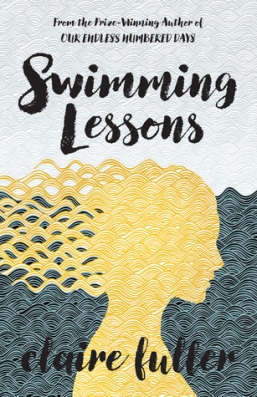 I have a lot of fatigue with the particular Marriages Gone Bad genre. Fates and Furies, Gone Girl, The Silent Wife, The Girl on the Train… this particular narrative is just so omnipresent that I find these books feel stale far too often. And in theory, Swimming Lessons doesn’t really sound like it’s going to be the exception. Gil and Ingrid, once in love, each in their own way reflecting on what went wrong. But I’m glad I took a chance on it anyway, because I thought there was something genuinely very refreshing and moving about this book.

Between the present-day chapters that follow the point of view of Flora, daughter of Gil and Ingrid, we have letters that Ingrid wrote to Gil in 1992. Ingrid tells the story of their marriage from her point of view and hides these letters amid the thousands of books that Gil owns, and when she finishes her last letter, she vanishes, presumed drowned, though Flora never believed it. So when Gil thinks he sees Ingrid in town one day, Flora returns home and attempts to learn the truth behind her mother’s disappearance.

While you definitely have to suspend your disbelief with Ingrid’s letters (she writes out lengthy bits of dialogue word for word in a rather un-epistolary fashion), these were still my favorite part of this novel. Ingrid’s character was fascinating and tragic. Seduced by her college professor and finding herself married and a mother at too young of an age, Ingrid writes these letters to assert herself after years of living in Gil’s shadow.

With the exception of Ingrid, these characters are hard to like, but I found them all the more believable for that. Gil was reprehensible in a lot of ways, but he was still human. Flora and her sister Nan were frustrating, but they were products of a difficult upbringing. All of these characters were real and well-crafted, and though I didn’t personally care for many of them, I couldn’t help but to be drawn into their complicated dynamic.

Two themes run parallel throughout Swimming Lessons – first, is it better to live with concrete knowledge of someone’s death, or to hold out hope that they might still be out there? And second, does a story belong more to the author or to the reader? These themes manifest themselves throughout the story in a clever fashion. This is one of those thought-provoking books that you can’t help but to keep thinking about every time you put it down. And you won’t want to put it down, with Claire Fuller’s gorgeous and compelling prose.

One final note – file this one into the Everything I Never Told You and Dead Letters category of ‘the blurb makes it sound like a mystery, but it really isn’t.’ This is a slow but evenly paced character-driven novel, and though the thread of Ingrid’s disappearance runs through it, that isn’t the focus. Just keep that in mind if you’re trying to decide whether or not to pick this up. If you read exclusively mysteries, this probably won’t be for you, but if you appreciate character-driven stories, this is a great one.