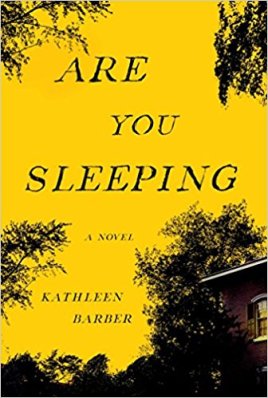 Are You Sleeping by Kathleen Barber

Are You Sleeping is a topical mystery about a podcast which reopens a decade-old case about the murder of a college professor. Podcast host and investigative journalist Poppy Parnell is unconvinced that the person convicted for the murder, Warren Cave, is actually guilty, and sets out to uncover the truth. Meanwhile, as the podcast gains momentum and becomes a nation-wide phenomenon, the victim’s daughter, Josie Buhrman, is forced to return home and confront her twin sister Lanie whom she hasn’t spoken to in ten years, in order to make sense of what happened that night. The entire conviction of Warren Cave hinges on a piece of evidence given by Lanie, who claims she saw Warren do it – but did she really?

I wanted to love this, and I was pretty sure I was going to, at first. It’s snappy, fast paced, and the use of the podcast makes for a really unique and intriguing premise. I loved the inclusion of comments on various social media outlets; I really felt like I was involved in the case in some voyeuristic way. That was very well done. Unfortunately, there was also a lot that I didn’t like.

First, the prose. It’s very simple and readable, which can be good for this genre where you don’t necessarily want your mystery to get bogged down in excessively flowery writing. So I didn’t mind that at first, but it eventually started to feel a bit too amateur. The dialogue could have been straight out of a Lifetime movie, and there was this thing the author did incessantly that really started to bug me: someone makes some big declaration to Josie, like, “you abandoned me ten years ago!” (this is never actually said – I’m just making up an example.) And then instead of replying immediately, Josie pontificates for an entire paragraph: “I realized he was right. I did abandon him. Ten years ago this happened, and I reacted this certain way. I realize now I maybe shouldn’t have reacted like that.” And it goes on and on and on, like that particular thought hadn’t occurred to Josie until right this second, and she has to take time immediately to reflect on it…. which would be okay once or twice, but I literally lost track of how many times a conversation was derailed by Josie randomly going into some deep introspection partway through it. It just felt unrealistic and melodramatic.

That isn’t to say that I didn’t like Josie. I did like her. I thought she was a well-developed character, along with nearly all of the rest of them. The huge exception for me was Poppy Parnell. If her name makes her sound like a villain from Harry Potter, that’s probably appropriate, since she reminded me so much of Rita Skeeter. She embodies just about every negative stereotype you can think of about investigative journalists – insensitive bordering on cruel, intrusive, heartless. At first I liked Poppy’s character for this reason, she did seem like the sort of person who would reopen a closed case without a second thought for the repercussions on the victim’s family. By the end of the book, however, she started to feel like such a stereotypical villain that I was half expecting her to start twirling a mustache.

To switch gears a little bit, my other huge problem with this book was that there never felt like there was much at stake. The characters are investigating a ten-year old case, and none of the suspects are really in a position to cause further harm at this point. There’s just a sense of urgency that’s missing from this narrative; there’s no ‘this needs to be solved NOW because someone’s in danger,’ just… a reopened case that can be solved at the characters’ leisure. I don’t mean to imply that this was dull or tedious read. It wasn’t; it was extremely fast and well paced. I just felt like there was some kind of tension missing throughout the whole thing.

And finally, the ending. No spoilers, but I can’t remember the last time I read a thriller where I was this disappointed with how obvious I thought the ending was. Also, a huge reveal basically hinges on a character randomly remembering a repressed memory, which of course happens in real life, of course people are triggered by certain sounds and smells etc. to remember something they’d been repressing. However, in storytelling, it just comes across as a bit too convenient.

If this book interests you for its cool premise, I hope you give it a try when it’s published. It’s short and fast-paced, which makes for a really quick read. And I did enjoy reading it… at least for the first 80%. That’s about when the rating really started plummeting for me. But based on other reviews so far, it looks like I’m going to be in the minority with this opinion!

And one final note: don’t read this and Dead Letters (by Caite Dolan-Leech) around the same time. There are so many similarities that I actually started mixing up the characters in my head, which is something I never do. Seriously: protagonist is an identical twin sister, the ‘good twin’, her sister is the wild twin; protagonist is estranged from her family because she chose to leave them behind and go abroad following a betrayal by her twin sister; the mothers in both case have mental health issues; protagonist returns home following a long absence and is confronted with her high school love interest who’s now involved with her sister… I mean, given their publication dates this has to be 100% coincidental, I don’t mean to imply otherwise – but still!! It was hard to keep remembered details from Dead Letters from creeping into this story.

I received a copy of this book in exchange for an honest review. Thank you Netgalley, Gallery Books, and Kathleen Barber.

3 thoughts on “book review: Are You Sleeping by Kathleen Barber”