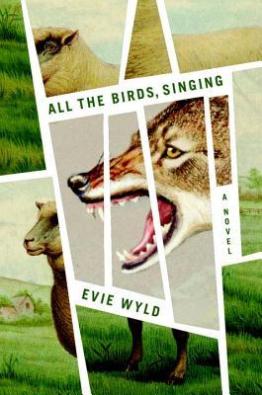 So, here’s the thing. This book is graphic. Horrifying depictions of animal death abound. And I’m a huge animal lover, so the way I get through reading that kind of stuff is to desensitize – I’m able to sort of turn the emotional side off long enough to read about graphic descriptions of sheep in agonizing pain. The problem is, doing that sort of deadens my emotional reaction to the rest of the book, too. I felt like I wasn’t able to engage with this novel the way I was supposed to – what was probably meant to come across as an intense emotional journey left me feeling sort of hollow.

All the Birds, Singing is a novel as bleak as the coastal English terrain where the protagonist, Jake Whyte, finds herself living as a sheep farmer. Jake is running from some kind of mysterious event in her past, that we slowly learn about through a series of flashback chapters that occur in reverse-chronological order. I was initially intrigued by this backwards timeline, but ultimately found it to be rather baseless in its execution.

This is a novel which flits between multiple genres – first it’s literary, then it becomes a thriller, wait, now it’s vaguely paranormal fantasy or magical realism – but instead of these elements existing in harmony to play off one another, the whole effort came across as rather disjointed.

But there are good things, too. I found this novel’s treatment of gender roles fascinating. Jake, with her traditionally male name, lives a rather stereotypically masculine existence – a manual laborer living in self-imposed isolation. It isn’t until a male figure enters her life that her dreary farmhouse takes on a homely quality. The dynamic between Jake and this stranger, Lloyd, is very compelling, and probably my favorite thing about this novel.

It’s really difficult to give a bottom line for this book. This is the kind of novel that everyone is going to have a different experience with. Where some readers will find it suspenseful and thrilling, others will find it boring and tedious. I’m not sure I fall into either category… this novel’s biggest strength is undoubtedly its atmosphere, and I respect Wyld’s skill at crafting a setting, and it did engage me on an intellectual level. But it’s a difficult book to pour your heart into as a reader without coming out feeling kind of sick. 3.5 stars.

3 thoughts on “book review: All the Birds, Singing by Evie Wyld”