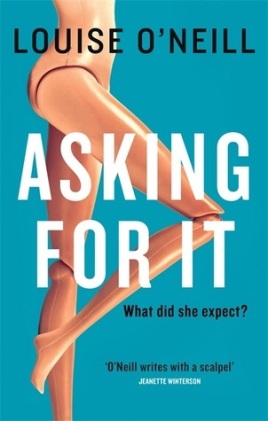 Asking For It is a difficult book. As if the subject matter isn’t disturbing and harrowing enough – an 18-year-old girl is raped and then ostracized from her community because of it – Louise O’Neill’s approach to this story is ruthlessly, unnervingly honest. Emma O’Donovan’s story isn’t one of healing and closure and happy endings, and it can be hard to read because of that, but it shows an important side to this story that we don’t often see depicted in fiction.

The most striking thing about Asking For It is how unlikable our heroine Emma is. The first quarter of the book is devoted to her treating her friends rather poorly and treating prospective partners like trophies; she’s stuck-up, vain, and self-centered. She wears short skirts and low-cut dresses, she drinks a lot of alcohol and takes drugs recreationally, and when she’s raped by four boys, the question in absolutely everyone’s mind – from her classmates to her parents to strangers who pass her on the street – is ‘wasn’t she asking for it?’ Louise O’Neill challenges this absolutely vile conception of what a ‘good victim’ should look like: someone who’s a virgin, who dresses modestly, whose trauma responses fit perfectly into the DSM-5. People like Emma (though she’s fictional, she’s all too real) don’t fit into this mold and their allegations of rape are often met with disdain, which is why it’s all the more critical that we support them.

Obviously, a book tackling an important and difficult subject matter doesn’t in and of itself make it a good book, so I’m glad to say that I was blown away by Asking For It on just about every level. O’Neill’s writing is stunning (I did such a double take when I flipped to the back cover and saw how young she is – not that young people can’t be good writers, obviously! but this book is nearly flawless on a technical level). Her characters are three-dimensional – Emma isn’t an archetype straight out of Mean Girls; she’s pretty and popular and vain, but it’s all rooted in a deep sense of insecurity that’s tied heavily into her upbringing, which O’Neill deftly explores in the way Emma relates to her family. I also liked that I didn’t at any point feel like I was being preached to, which is something I occasionally feel while reading YA as an adult. O’Neill explores these issues with subtlety and doesn’t shy away from asking difficult questions of her readers. My one minor critique is that the rate at which secondary characters are introduced at the beginning of the novel is a little excessive – the first thirty or so pages were me going ‘wait, who is that?’ – but once over this hurdle, the book settles into a gripping pace.

This book isn’t going to be for everyone, and I’d certainly advise that you proceed with caution if you’re triggered by this subject matter or if you struggle with anxiety (my heart was racing pretty much the entire time I was reading). But it is such a critically important contribution to the discussion of rape culture. O’Neill fearlessly advocates justice for all rape victims, not just the ones whose stories are easier to digest, that fit better into our conceived narrative of what ‘counts’ as rape. We need to stop blaming rape victims and start listening to their stories, full stop.

29 thoughts on “book review: Asking For It by Louise O’Neill”