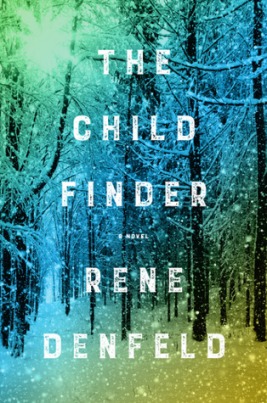 The Child Finder is a very strong contender for the sappiest book I have ever read. And I guess there’s nothing wrong with a little sappiness now and then, but, I’m not kidding –

– this book was so saccharine I felt like I had to brush my teeth at the end of every chapter. I’m sorry but is that not the corniest sentence ever written???

Anyway, let’s back up. The Child Finder is a thriller (the least thrilling thriller of all time, but I guess that’s how it’s being classified) about a woman who finds missing children for a living. Though there are some seriously dark and disturbing themes in these pages, the narrative voice reads at a level your average ten-year-old would be comfortable with – it is painstakingly, aggravatingly childish. This book is the rather unfortunate result of someone actually sitting down and saying ‘you know what stories about pedophilia need? More whimsy.’

But, you know what, I think a certain type of writer might have been able to pull this off. I’m thinking of something like The Pillowman by Martin McDonagh (a play which balances fairytales with a harrowing exploration of child abuse), or Elmet by Fiona Mozley (which fuses dark themes with the narrator’s childish innocence in a way that’s subtle and breathtaking). But the integration of fairytales in The Child Finder was just so goddamn heavy-handed and patronizing. This book was trying so hard to be poignant and moving (despite having nothing of substance to say about trauma or child abuse) it was actually a little embarrassing.

I mean, this is the quality of prose and dialogue that I’m talking about:

Naomi felt something deeper than crying, a flush in her womb. “Are you trying to talk your way into my bed?” she asked, her voice thick with emotion.

“No.” His voice sounded warm. “I’m trying to talk my way into your heart.”

You have to be joking, right? Is this a Lifetime movie??

Aside from all that, Naomi has to be the most exasperating protagonist of all time. She’s actually referred to, constantly, as ‘the child finder,’ because that’s not weird at all, I guess? and anyway, she is the most alluring woman alive. I know this because every man she comes into contact with immediately wants to have sex with her. And her personality consists of the fact that she only trusts three people – a fact that we’re reminded of at least once a chapter – and… that’s just about it.

I could go on and on. The subplot about Danita was transparent and emotionally manipulative. The actions and sophistication of the five year old girl, Madison, stretched all suspension of disbelief beyond breaking point. The romantic subplot was contrived and obvious. Every single sentence was either corny or trite or overwritten or some combination of the three. The story unfolded so predictably, there was not a single moment of genuine suspense. The resolution couldn’t satisfy itself with merely tying up the main plotline in a neat bow – it had to tie up several minor plotlines in neat bows too, lest Rene Denfield credit her audience with the ability to think for ourselves.

I’m definitely in the minority with this one – at a glance I don’t think any of my Goodreads friends have rated it less than 4 stars. And admittedly the atmosphere of this snowy Oregon forest was captured beautifully. That’s the only positive thing I can think to say. Maybe the audiobook was a bad decision – maybe it just exacerbated the feeling I had that I was being preached at. But you cannot convince me that reading this book on paper would have eradicated its sundry narrative faults or convinced me that this is anything other than twee drivel masquerading itself as a deep and profound reading experience. Getting through this was borderline unbearable.

32 thoughts on “book review: The Child Finder by Rene Denfield”