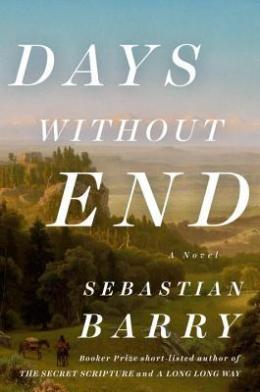 You know what’s tragic? When you find a book that seems tailor made for you, and then you end up not clicking with it at all. If we’re going down a checklist, Days Without End is everything I should love: contemporary Irish lit, LGBT protagonist(s), a blend of literary and historical fiction, depressing, lyrical prose; hell, my copy even has a quote from Kazuo Ishiguro (one of my all-time favorite writers) on the cover.

No one is more surprised than I am that I hated it so much.

First, I want to make this clear – Days Without End is not a bad book. I don’t think the Man Booker panel or the myriad of reviewers who gave this 5 stars are crazy at all. My one-star rating is very much on me.

My main problem with this book is that I found the narrative voice almost impossible to follow. The fusion of dialect and lyricism didn’t add up for me – the protagonist, Thomas McNulty, is an uneducated young man, which is reflected in the improper grammar used by Sebastian Barry in his first-person narration… but then you’d also have sentences like “Empurpled rapturous hills I guess and the long day brushstroke by brushstroke enfeebling into darkness and then the fires blooming on the pitch plains.” If you’re committing to capturing an authentic voice to such an extent that you’re writing your entire book in dialect, how is this level of poetic imagery consistent with that? I thought the internal logic of Thomas’s narration was filled to the brim with contradictions, and it pulled me out of the story again and again. I also couldn’t reconcile the fact that this character was raised in Ireland, and he was talking like he was straight out of a John Wayne western. My brain just had the hardest time following this prose. I’d only be able to read 5 or 10 pages at a time before I started to zone out (which is why I’d been reading this since November).

This kind of goes hand in hand, but as for the story itself, I was bored out of my mind. There was little to no emotional depth here – this was a very monotonous account of the Indian Wars and the Civil War. Brutality is relayed with dispassionate narration (I realize this is The Point, but it did not work for me); characters had indistinct personalities; I still don’t feel like I know the first thing about Thomas or the great love of his life, John Cole. This is one of those books where I could have read the first and last chapter and skipped everything in between, and I would have had the exact same experience with it. Well, I actually would have had a better experience with it, if I’d only had to read Barry’s lifeless prose for 20 pages rather than 250. But as for the plot, I don’t think I would have missed much.

Ultimately, I didn’t get anything out of Days Without End besides frustration. Emotionally this book left me cold and intellectually I failed to engage with it. But again, I am in the clear minority… if you’re curious about picking this up, go for it. You’ll know by the second page whether the narrative voice works for you. I should have trusted my gut and dropped it then and there.

30 thoughts on “book review: Days Without End by Sebastian Barry”