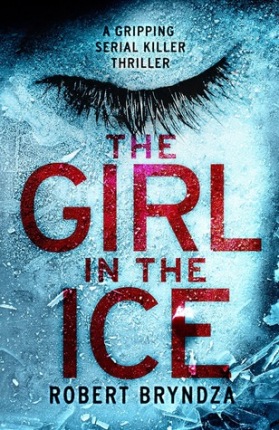 THE GIRL IN THE ICE by Robert Bryndza
★★☆☆☆
Grand Central Publishing, 2016

Well, I can’t say I get the hype surrounding this one.

The Girl In The Ice follows DCI Erika Foster, who’s recently been reinstated to the police force after a failed mission which resulted in the death of her husband. She’s investigating the death of young socialite Andrea Douglas-Brown, whose body was found in a frozen pond in London. Much tedium ensues. I guess I wouldn’t describe The Girl In The Ice as a slog, but it wasn’t exactly a page-turner, either. Especially thanks to a totally unnecessary conflict between Erika and her boss, which results in Erika being sidelined from the investigation and then spending many chapters just waiting for people to call her back and keep her updated. This book was so much longer than it needed to be because of this subplot.

Anyway, interspersed with Erika’s perspective are chapters from the point of view of the murderer, who is referred to (presumably in an effort to hide their gender?) solely as ‘the figure.’ It’s alright the first time Robert Bryndza does it, but then it just gets weird. “The figure watches Erika. She steps toward the window. The figure retreats. I want to kill her, muses the figure.” (That’s not a real quote, but it basically could be.) I mean, why wouldn’t you just write these chapters in first person?? Or use a gender neutral ‘they,’ or eliminate these kind of pointless chapters altogether, or just… do anything to avoid having to resort to ‘the figure’??

Which brings me to my main complaint with this book: the writing was startlingly, inexcusably bad. I obviously don’t read thrillers for their literary merit, but we’re almost verging into ‘how did this get published’ territory with lines like:

“‘DCI Sparks. I have just been to the crime scene and there are things…’ started Erika.

‘I said, I’m now in control of this crime scene and I’m ordering you to step aside!’ shouted Sparks, losing it.”

And that’s not even to mention the murderer’s eloquent declaration:

“‘You think you can analyze me. Rationalize what I did, why I killed? I did it because I CAN.'”

When you have to put the book down during the big climactic scene because you’re laughing too hard, that’s never a good sign.

There’s one element of this book that I thought I was going to love – the criticism of how the investigation into Andrea’s death wasn’t being conducted properly in order to preserve the rich family’s decorum (e.g., Erika isn’t allowed to announce in a press conference the name of the shady bar where Andrea was last seen, because it would look bad for the family to be associated with a place like that). The problem is, it quickly becomes so heavy-handed, and no matter how much I agree with a message, I don’t like it being shoved in my face. You can never go wrong with crediting your readers with a bit of intelligence.

Thank you to Netgalley, Grand Central Pub, and Robert Bryndza for the copy provided in exchange for an honest review.

18 thoughts on “book review: The Girl in the Ice by Robert Bryndza”