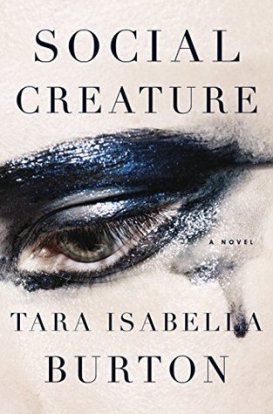 Social Creature is like The Secret History‘s beach-read cousin. It follows the story of Louise, a down on her luck aspiring writer in New York City who meets the rich and glamorous Lavinia, and the two form a sort of dysfunctional, obsessive friendship which is barreling toward tragedy, as we’re told from the onset that Lavinia is going to end up dead.

I don’t think I’ve ever described a book as ‘intoxicating’ before (and in fact I tend to roll my eyes at that descriptor), but that’s the word I keep coming back to with Social Creature. This book is intoxicating. Just like Louise, the reader is pulled into the glitz and glamour of Lavinia’s carefree socialite lifestyle, ignoring the glaring warning signs about the unhealthy and obsessive road she’s going down. With all the inevitability of a Greek tragedy, this is a story that ends terribly for absolutely everyone involved. But it’s addicting and utterly impossible to look away.

Social Creature doesn’t have the same flawless prose or pervasive intellectualism as The Secret History, so maybe its vaguely pretentious tone is unearned, but it does have all the unlikable characters, and the same cautionary tale against indulging too heavily in the fairytale of living an impossibly elite lifestyle.

On the surface Social Creature is a fun thriller and a rather addictive beachy read, but underneath it’s rather bleak and sad and tragic. I think what haunts me the most about this book is how much I related to Louise at the beginning of it, and how harrowing it was to watch everything spiral out of control for her. This book is like a train wreck that you can’t look away from, but for whatever reason, that’s my favorite kind of story.

Thank you to Doubleday, First to Read, and Tara Isabella Burton for the advanced copy provided in exchange for an honest review.