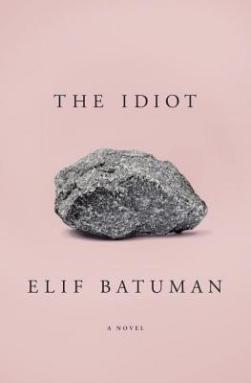 The Idiot is a book you either click with or you don’t. I absolutely understand why some readers have found it maddening. I can’t recall the last book I read where less happened than it did here, which, considering that it’s nearly a five-hundred page book, is kind of a triumph in its own right. But I got along with The Idiot splendidly.

This is a quiet, sparse, cerebral, philosophical, surprisingly humorous account of a Turkish-American girl’s first year at Harvard. In one of her Russian classes she meets Ivan, an older Hungarian student, and she becomes inexorably drawn to him. This isn’t a romantic book, necessarily, but it is one that ruminates on the nature of love. Selin’s pursuit of love and pursuit of intellectualism run parallel, both stemming from a desire to understand and be understood, and this is something that Batuman explores deftly in these pages.

The most noteworthy thing about this book is the brilliant protagonist that Batuman has created in Selin, and her striking narrative voice. Selin is first and foremost an observer. That’s not to say that she isn’t an active participant in her life, or that she doesn’t make decisions, because she does, but often these decisions come more as reactions to the people and situations around her rather than from within herself. Selin observes the world in order to gain a deeper understanding of herself and where exactly she fits into the cosmic puzzle – and that’s something I really connected with. I lost track of how many lines I highlighted because yes, that is me, that is my entire college experience encapsulated in a single phrase – but this one in particular stood out to me:

Even though I had a deep conviction that I was good at writing, and that in some way I already was a writer, this conviction was completely independent of my having ever written anything, or being able to imagine ever writing anything, that I thought anyone would like to read.

I will admit to flinching at this and some of the other truths that The Idiot elucidated for me.

My only complaint is that it overstays its welcome by about a hundred pages… but I’m actually struggling to make up my mind about whether I think that’s an objective fault, or if this feeling is due to the fact that I traveled halfway across the country halfway through reading this book and had to take a break for several days due to work things and eventually came back to it in a different (and more tired) frame of mind.

Anyway, I can’t think of many people I’d recommend this to, and I can think of several I would specifically not recommend this to (hi, Hadeer), but I thought it was brilliant. It’s an easy, smooth read in some ways, but a difficult, dense read in others – Batuman doesn’t rely on a flashy vocabulary to show off her intelligence, but it’s on display on every single page. This isn’t a book you read for escapism as much as one you read in order to gain a clearer picture of your own reality. For me, it was a resounding success in that regard.

23 thoughts on “book review: The Idiot by Elif Batuman”