I did it, I finished the Women’s Prize 2018 shortlist!  And a few other books off the longlist that I won’t talk about in this post.  I’m so happy to report that I am in love with this shortlist.  I admittedly was underwhelmed by the longlist, but, with a couple of exceptions, I think this shortlist really is the best of the list overall.  Usually with shortlists there’s at least one book I end up really hating or not clicking with, but that wasn’t the case here: I didn’t rate any of these books lower than 3 stars.  In an ideal world I’d swap out the last book on this list for Elmet by Fiona Mozley, but oh well.

Now, I’m going to go through the list, starting with what I’d least like to see win, making my way up to what I’d most like to see win.  With an awkward mix of US and UK covers because I make my own rules here.

6. The Mermaid and Mrs Hancock by Imogen Hermes Gowar.  I actually enjoyed this book more than the one that I’ve given the 5th place slot, but the reason I’m ordering it this way is because I at least understand that book’s inclusion on this shortlist, whereas The Mermaid‘s leaves me a bit baffled.  The prose in this novel is admittedly stunning, and where that alone should be more than enough to elevate it in certain literary prizes, I feel like the Women’s Prize values other attributes more highly.  To put it bluntly: there is nothing even remotely topical about this book that speaks to our social climate or pervasive social attitudes the way the rest of the books on this list do.  This is a nice enough story, and it’s written well, but if that’s enough to win it the prize, I will be confused more than anything. 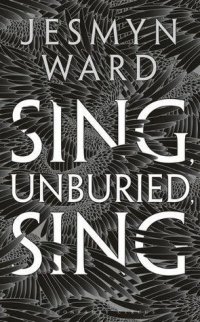 5. Sing, Unburied, Sing by Jesmyn Ward.  This book is an important, necessary examination of race relations in contemporary American society, that scrutinizes systemic violence and inter-generational cycles of poverty.  Its numerous accolades are hardly difficult to understand.  However.  While Ward endeavors to play off modern classics – Beloved, As I Lay Dying – her own writing pales in comparison.  In my opinion, there’s not much to recommend Sing, Unburied, Sing over either of those books or over a number of other contemporary African American novels that ruminate on racism and oppression.  I also felt that the magical realism element was an awkward and heavy-handed attempt to drive home this novel’s already abundantly apparent themes.  I would admittedly be disappointed to see this novel win since I already feel its literary merit has been overhyped.  An important book, yes, undoubtedly; but one that I feel lacks the artistry of the rest of this list.

4. Sight by Jessie Greengrass.  Sight left me conflicted, pondering the question ‘profundity or pretension?’ but at least it stayed on my mind for days after I finished it.  For such a short little novel, it packs a powerful punch, as the narrator reflects on her decision to become a mother, while attempting to reconcile that with the recent death of her own mother.  Commentary on bodily agency, a woman’s role in society, and whether we can truly know other people make this a worthy and thought-provoking read.  It did get a bit overly solipsistic at times – this narrator feels so removed from humanity that you’d think she is the only person to ever become a mother, and it was difficult not to roll my eyes at certain observations that came from such an insular perspective.  But the prose is so strong and the insights occasionally so incisive that I would not be surprised if this ends up taking the prize, and I wouldn’t be upset about it.

3. The Idiot by Elif Batuman.  Deciding on the order for my 2nd and 3rd place titles was a major Sophie’s choice situation.  This is similar to the way I felt about books 5 and 6 – in this case, the book I personally loved more I’m putting 3rd as I believe the next book I’ve selected would be a more deserving winner.  But, The Idiot has my heart.  It’s a bitingly clever, humorous account of a Turkish-American girl’s first year at Harvard, and her feelings of mediocrity as she searches for any kind of recognizable truth in her studies or in her doomed love life.  As it’s this year’s Marmite book, you will either love or hate The Idiot, and you will know which camp you fall into by page 5.  But the kind of absurdity inherent to higher academia that Batuman tapped into really resonated with me, and I think this book is a brilliant commentary on the paradoxical role of language in elucidating and obfuscating.

2. Home Fire by Kamila Shamsie.  A contemporary retelling of Antigone, Home Fire is set in modern London, and follows a cast of all-Muslim characters, highlighting their varied relationships with their own faith.  This is a book that tackles Islamophobia, religious extremism, and national identity, all driven home by a positively heartbreaking and tragic narrative that Shamsie chronicles with elegance.  And, a final note about adaptations and intertextuality and literary references: I put down Sing, Unburied, Sing thinking ‘I should have just re-read Beloved instead,’ but I put down Home Fire and immediately thought ‘I need to re-read Antigone,’ the distinction being that I felt Home Fire really added something to my appreciation of Sophocles’ classic, whereas I felt Sing, Unburied, Sing paled under Morrison’s shadow.  If you’re going to write a novel in conversation with classics, Shamsie shows how it’s done.

1. When I Hit You by Meena Kandasamy.  When I Hit You chronicles one Indian woman’s experience of surviving an abusive marriage, as she writes this book in an attempt to reclaim agency of her life after it’s been slowly stripped away by her controlling husband.  It’s every bit as brutal as you might imagine, but it’s never gratuitous.  Through intelligent prose Kandasamy challenges the reader to become so immersed in this woman’s circumstances the question ‘why doesn’t she just leave?’ dies on all of our lips.  This is a cleverly written, politically charged novel which examines a woman’s role in society, which takes an unflinching look at the psychology of those who endure domestic violence, which challenges any ‘feminist’ discourse which places blame upon victims who are unable for whatever reason to escape abusive relationships.

**Winner prediction** When I Hit You by Meena Kandasamy.  It’s topical, it’s experimental in format, it’s constructed with such skill and artistry that you simply cannot deny its impact.

So, who else read the shortlist this year?  Who’s your winner prediction and who would you like to see win?  What did you think of the shortlist overall?  Come chat with me!