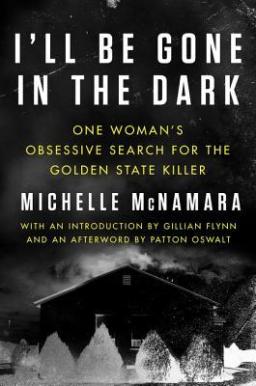 I’LL BE GONE IN THE DARK: ONE WOMAN’S OBSESSIVE SEARCH FOR THE GOLDEN STATE KILLER by Michelle McNamara
★★★★☆
Harper, 2018

I’ll Be Gone in the Dark is the chilling, gripping account of crime writer Michelle McNamara’s passion project of tracking the Golden State Killer. Though this book only came to my attention because of the two special circumstances surrounding it – McNamara’s untimely death, and a suspect being charged in the investigation earlier this year – this book does stand up as a really fantastic contribution to the true crime genre. McNamara’s empathy, drive, and detail-oriented intelligence shine through her investigation, and it was fascinating to track her progress of investigating the Golden State Killer – a moniker that McNamara herself coined after DNA testing proved that the East Area Rapist, the Original Night Stalker, and the Visalia Ransacker were all the same person. Though the Golden State Killer had not yet been caught at the time of this book’s publication and therefore it lacks a neat and satisfying epilogue, it’s an interesting investigative journey that’s well worth reading.

I do have to say that I sort of regret listening to the audiobook – not because it wasn’t well-narrated, on the contrary I think the narrator does a brilliant job, but because I personally don’t retain things as well audibly as I do visually. And for me, a huge joy of reading books like this is in the details – keeping firm track of the names of suspects and investigators and victims and locations in my head. After a while here they started to blend together because of their sheer volume, which was a bit frustrating as I’m quite good at names when reading and I don’t enjoy the feeling that there are details out of my grasp. But that’s just me – if you’re more of an auditory learner than I am, the audiobook is a great choice. Either way, this is one that stands up to the hype and I’d highly recommend checking it out.

11 thoughts on “book review: I’ll Be Gone in the Dark by Michelle McNamara”