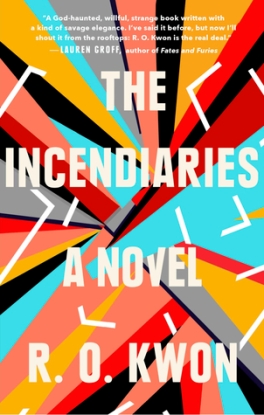 Both concise and disturbing, The Incendiaries may lack the depth needed to tell its story convincingly, but there’s something magnetic about it nonetheless. In only 200 pages it follows Will and Phoebe who meet in college; Will has recently lost his faith in God and latches onto Phoebe as a replacement, while Phoebe blames herself for the recent death of her mother and finds herself drawn into an extremist cult.

The entire story is narrated from the perspective of Will, though chapters supposedly from the point of view of Phoebe and cult leader John Leal are also interspersed. But even through these chapters the reader remains in Will’s head, as he imagines the thoughts and actions of these other two characters when their narratives diverge. Unpalatable as it is to read the thoughts of a female character through the eyes of a man, you have to trust that Kwon is employing this technique deliberately, as it does ultimately end up being a type of subversion. As Will attempts to fill in the gaps of Phoebe’s story, certain limitations in his perspective become apparent, and his idealistic construction of Phoebe’s character feels like a deliberate riff on similar narratives which use this device without the same awareness of it. This isn’t handled seamlessly from start to finish, but I mostly appreciated what Kwon was trying to achieve with the perspective angle.

My biggest issue with this book was the way in which Phoebe and Will’s characters are both distilled down to a single element (Will’s loss of faith, Phoebe’s guilt), and John Leal is such a nonentity that he really only exists as a plot device. Kwon is able to accomplish a surprising amount in her examination of grief and faith, but it’s necessarily achieved at the expense of multifaceted characters. The writing itself is poetic and energized and I flew through this book, but for me it did fall a bit short of its potential emotional impact. But I think Kwon shows so much promise for a debut writer and I’m very curious to see what she does next.

7 thoughts on “book review: The Incendiaries by R.O. Kwon”