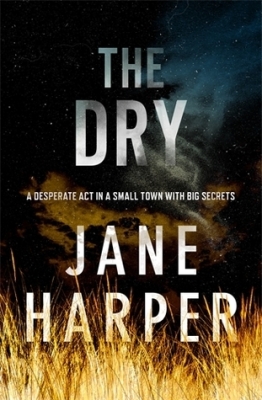 This was a perfectly competent thriller and I’m not sure I have much else to say about it. I will admit I had been expecting something a bit more… unique? shocking? twisted? original? – because it seems to be so universally adored. But it’s clearly so adored because it’s a perfectly solid book that’s pretty hard to find fault with.

The setting is just perfect, the arid Australian farmland brought to life vividly. It’s funny how the setting of a thriller never seems to be the most important element, but it’s always a bit striking when you find one set somewhere other than small town England or wintry Scandinavia or New York City. Characters and environment play off each other well, and Harper captures that small-town claustrophobia perfectly.

I do have one huge criticism, and that’s the use of italicized flashbacks to show backstory. Frankly I found it lazy – can you really not work that information into the description and dialogue? – but it also pulled me out of the story constantly. You’d be in the middle of a meeting between a detective and a suspect, and all of a sudden you get two paragraphs in italics about the detective’s childhood, and it really did not work for me.

But, ultimately I was satisfied. I read it in two days, it was a compelling read, the big reveal was perfect, and there were enough subplots and character intrigue that it’s gripping from start to finish. I’m definitely interested in checking out the sequel, with hopes that the italicized flashbacks do not continue. 3.5, I am having the hardest time settling on a star rating and whichever one I end up clicking in two seconds is going to be a rather arbitrary choice.

9 thoughts on “book review: The Dry by Jane Harper”