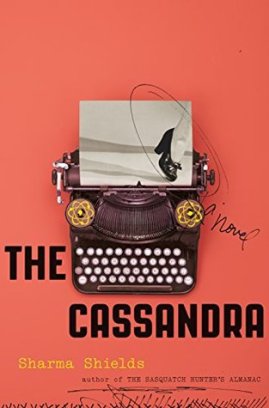 Writing this review hurts me a little because this was easily one of my most anticipated books of 2019, but I’m sorry, this was pretty terrible. The premise was genius: it’s the story of the Greek mythological figure Cassandra retold and set at Hanford, the research facility in the U.S. that developed the atomic bomb during WWII. But I had four main problems with The Cassandra that I just couldn’t get over: characters, plot, themes, and its success (or failure rather) as an adaptation, so let’s get straight into it.

Every single character in this book was one-dimensional. Within seconds of meeting Mildred (the Cassandra figure), her inexplicably awful mother and sister, her wise and worldly best friend Beth, the charming but cruel Gordon, and the pathetic but well-intentioned Tom Cat, you know what each one of their roles in this story is going to be (which has nothing to do with the myth at the heart of the narrative – more on that in a minute). Every single one of these characters is just pitifully one-note. None of their painfully obvious characterization is developed or explored or subverted, they all just exist comfortably as conduits for the story to advance where it needs to go.

Which brings us to the next problem, how the plot drives the characters and not the other way around. The book starts with Mildred relaying to the reader that she’s had a vision which tells her that she needs to go to Hanford, so that’s exactly what she does. She gets on the bus to head to the facility and she meets Beth, who shakes her hand and promptly declares that the two of them are going to be best friends, and that’s exactly what happens. We’re informed that Tom Cat falls in love with Mildred, because he just does, apparently; we don’t get to see anything develop in a natural or organic way. There’s no rhyme or reason to be found, the story just kind of zips along and you’re meant to accept that the characters’ actions makes sense even when there’s no basis to any of it.

And this would all be somewhat okay if the themes were sufficiently rich and engaging, but they just weren’t. Mildred starts having visions that ‘the product’ being developed at Hanford will wreak havoc and destroy innocent lives, but when she tries to warn the researchers, her concerns are ignored. Mildred then has to grapple with her own role in working for the facility that’s developing this weapon: even as a secretary, does she hold some kind of responsibility? There’s not… a whole lot of thematic depth to engage with there, despite very obvious present-day parallels, but this conflict is the main driving force in the story. And at another point, about 70% through the book, Mildred is brutally raped (as in, seriously brutal, do not enter into this book lightly), and Shields comes close to making some kind of point about how not believing Mildred about her visions has parallels to not believing women who are assaulted, but not much is really done with that opportunity.

And finally, this has to be one of the laziest myth adaptations I have ever read. There are two recognizable elements from the original story: that Cassandra can see the future and no one believes her prophecies, and that she’s raped. One of my favorite things about reading retellings is trying to discern which characters played which role in the original, and of course as a contemporary writer playing with an established story you should be allowed to invent characters and subvert character types and put your own unique stamp on the story, because otherwise what’s the point? But in this case, the original myth was such a rudimentary blueprint that it felt like the author wanted to use the myth only as an excuse to incorporate visions into the story without the reader questioning it too much. Mildred is Cassandra, of course (but why does Mildred get these visions in the first place? there’s no backstory involving an Apollo figure to rationalize this, it’s just another thing we’re meant to accept), and the person who rapes Cassandra is obviously Ajax the Lesser, but do not expect many other elements from the original myth to come into play. I certainly admired Shields’ research into the Hanford facility, but maybe she should have cracked open a copy of the The Oresteia while she was at it.

So, all things considered this was a pretty big disappointment. If you’re looking for a contemporary reimagining of a mythological story I’d suggest Home Fire by Kamila Shamsie or Everything Under by Daisy Johnson, or if you’re looking for feminist mythology there’s The Silence of the Girls by Pat Barker or Circe by Madeline Miller. With so many fantastic mythological retellings published in the last few years, I think you can safely skip this one without missing much.

Thank you to Netgalley and Henry Holt for the advanced copy provided in exchange for an honest review – sorry this didn’t work for me! 😦

25 thoughts on “book review: The Cassandra by Sharma Shields”