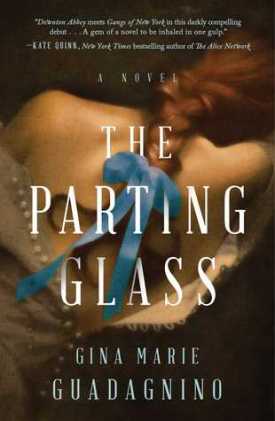 What a lush and lovely book. I picked up The Parting Glass partially on a whim, but it captivated me practically from the first page. It tells the story of lady’s maid Maire O’Farren, alias Mary Ballard, an Irish immigrant employed by the beautiful young mistress Charlotte Walden in 19th century New York. Maire is captivated by Charlotte to the point of obsession, but Charlotte is having an affair with the stable groom, who happens to be Maire’s twin brother. Through this awkward love triangle of sorts, The Parting Glass explores passion and obsession and sexuality and corruption and social unrest in a turbulent period of American and Irish history, and it does so with a gripping, pacy story that I could not put down.

One thing I loved about this book was its rich historical detail. In the afterward you can get a sense of the amount of research that Gina Marie Guadagnino put into this novel, and it really does show the whole way through. Though she never pulls the historical context to the forefront in a distracting way, she still firmly establishes the setting, which she could have easily downplayed in favor of the various romantic subplots. Instead, this is actually an impressive piece of historical fiction that focuses on the reception of Irish immigrants to America in the 19th century – not exactly untread territory, but it’s handled in a way that feels relevant and immediate.

The other huge strength of this book for me was Maire’s relationship with her brother Seanin. With a mother who died in childbirth and a father who died when they were young, growing up in Ireland Maire and Seanin were inseparable, and it’s not until they move to the US that cracks in their relationship begin to form, Charlotte only acting as a catalyst for a rift that runs much deeper. I thought it was a fantastic depiction of a close, intense relationship that can easily flip the switch from love to hate. While Maire and Seanin’s characterization was brilliant, I would have liked to have seen a bit more of Charlotte, though I’m wondering if her character was kept deliberately hazy as a reflection of Maire’s idolization.

I will say, to anyone picking this up because of its Fingersmith comparison, don’t expect Sarah Waters’ quality of prose (I haven’t read Fingersmith, but I have read Waters before). Though I do think Guadagnino has a fantastic command of language, this isn’t quite on that same literary level, which I point out only because I imagine that’s going to be the main criticism held against this novel. It almost feels overly dismissive to call this a beach read for Waters fans, but there may be some truth to that; it’s certainly a clever book, but not half as dense as Waters. But I’d recommend you just ignore that comparison and enjoy it for what it is – a gem of lesbian historical fiction with compelling characters and a well-developed political backdrop.

Thank you to Edelweiss and Atria for the advanced copy provided in exchange for an honest review.

You can pick up a copy of The Parting Glass here on Book Depository.