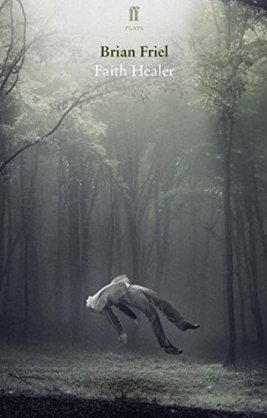 When I was reading Faith Healer, this script got two distinctions from me: (1) being one of the most depressing things I have ever read, and (2) probably being the first play I’ve encountered where I actually wondered whether or not it would work on stage as well as it does on the page. I mean, it must work, because it’s seen a number of illustrious and well-reviewed revivals over the years, but it reads comfortably like a novella, and if you are planning on seeing it on stage (in the upcoming Los Angeles production, for example) I would highly recommend familiarizing yourself with the script first, because I imagine a lot could be lost in translation to the unfamiliar viewer.

Written in four monologues, this play tells the story of faith healer Frank Hardy. Frank’s two monologues (each about ten pages long) open and close the play, and in between we also hear from Frank’s wife, or maybe his mistress, Grace, and his stage manager Teddy. Together they chronicle the downfall of Frank’s faith healing act, but less focus is given to the narrative itself than the relationship between these three characters and the way it has disintegrated over time.

This play’s magic is all in the details. If you’re reading or watching this just trying to glean the overall gist, so much is going to be lost. Friel expertly navigates three conflicting accounts of the same events; each character tells essentially the same stories, with at times heartbreaking variations. The biggest punch to the gut was after hearing Grace’s account of her newborn baby dying, and hearing how Frank fashioned a makeshift cross for the grave, we then get Teddy’s account that Frank was nowhere to be found when Grace went into labor, and how Teddy was the one to build the cross and say a prayer over the grave. The fallibility of memory is probably one of my favorite themes in literature and when it’s rendered with the same kind of subtlety as it is here, it’s hard not to be deeply affected and unsettled. The other salient theme running through this play is Frank’s unreliable gift for faith healing – with noticeable parallels to artists’ creativity, the whole play reads as an allegory. Can truth exist in a vacuum or is it always shaped by the stories we tell?

If you aren’t someone who ordinarily enjoys reading play scripts, I’d still recommend checking this out if it interests you, as again, it reads very much like a novella. Friel’s writing is sharp and lyrical and this leaves no question as to why he’s one of the most influential playwrights to come out of Northern Ireland.

You can pick up a copy of Faith Healer here on Book Depository.