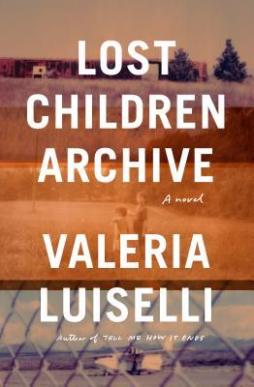 I think the books that fall into the ‘admired it, didn’t like it’ camp are some of the hardest to review, and that’s exactly how I felt about Lost Children Archive. I think this is objectively a very good book. Valeria Luiselli sets out to do something incredibly ambitious, mixing media forms and offering a wealth of commentary on migration and displacement. But all that said, it left me feeling rather uninspired.

This book and its main narrator are unapologetically aloof, and I think that was the main problem for me. Luiselli leans heavily on intertextuality to spin this story, and I was reminded of two other books I’ve read recently: The Friend by Sigrid Nunez and Where Reasons End by Yiyun Li. Incidentally, the female narrators in all three of these novels are nameless, and all three of their narratives are mired in literary references. But I felt like Nunez’s and Li’s narrators were using these references to cultivate a sense of self – I felt like I was gaining an understanding of who they were through this technique. In contrast, I never got a sense of who the narrator of Lost Children Archive was supposed to be – the intertextuality here read as generic and often soulless intellectualism. And it’s frustrating because at one point the narrator says “reading others’ words, inhabiting their minds for a while, has always been an entry point to my own thoughts,” which really resonated with me as a reader, but I ultimately found her own thoughts to pale next to those of the authors she quoted.

But none of this is to say that Luiselli isn’t a good writer. Her prose is incredibly well-crafted, and it’s hard not to admire her technical skill. And thematically, this book is quite the feat: Luiselli examines the U.S.’s current border crisis through the eyes of a family taking a cross-country road trip, whose marriage is disintegrating due to the husband and wife engaging in two passion projects whose ideologies and practicalities conflict.

About three-quarters of the way through the novel, the perspective shifts to the narrator’s son, and while I preferred this section (as this is where the plot actually started advancing), I wasn’t convinced by his mature narrative voice, and at this point the weird mythologizing of the ‘lost children’ started grating. This is largely a narrative about voicelessness, which doesn’t attempt to give voice to the migrant children as much as highlight their absence in the narrative, and while I respected what Luiselli was trying to do, it fell a bit flat for me.

So ultimately, a mixed bag. I’m glad I read this, I think it deserves to be longlisted for the Women’s Prize and I won’t be upset when it probably makes the shortlist, but while I admired it and found it punctuated by moments of utter brilliance, on the whole it was a bit of a chore to get through.

You can pick up a copy of Lost Children Archive here on Book Depository.