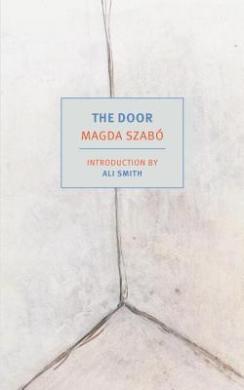 THE DOOR by Magda Szabó
translated from the Hungarian by Len Rix
★★★★☆
NYRB Classics, 2015
originally published 1987

What a brilliant, infuriating, deeply perplexing book.  The Door centers on the relationship between two very different women – the protagonist who is a writer, and her housekeeper, an older woman named Emerence.  A clash of values between the two provides the main conflict for this tense and elusive story: Ali Smith writes in her brief introduction, “Their relationship transforms into one full of the barbed hostilities of love.”

Emerence – cold, strong, and fiercely, irrationally independent – is an unforgettable character, though she doesn’t feel like a real person as much as a construct; but a construct for what is the question.  While The Door reads almost like a twisted fable, it’s morally ambiguous to the extreme: both characters engage in destructive behavior and it’s difficult at times to discern who exactly you should be sympathizing with.  Emerence herself feels like a (very deliberately constructed) contradiction: she abhors organized religion but appears to be the embodiment of something almost divine – there’s also a question of her relationship to Hungary’s shifting cultural landscape that I think could benefit from a deep dive into the sociopolitical context of this historical period.

But though I found this book brilliant from start to finish, there was something I grew to dread about picking it up the closer I got to the end.  Like Emerence herself, this book is entirely devoid of warmth in a way that started to feel draining; this from someone who genuinely loves dark fiction.  I’m happy to have read it and am eager to read more from Szabó – and from Len Rix, who did a great job with the translation – but I can’t decide if this is the sort of book I’ll want to revisit in a few years or whether I’m sufficiently unsettled as to appreciate it from afar without attempting a reread to reengage.  Time will tell.

You can pick up a copy of The Door here on Book Depository.

14 thoughts on “book review: The Door by Magda Szabó”