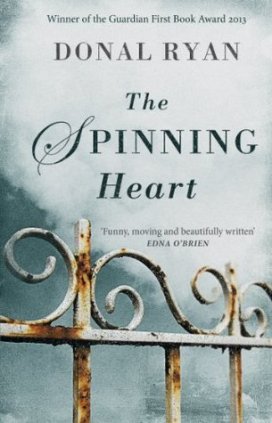 The Spinning Heart is just tremendously, unbelievably good.  Set in post-Celtic Tiger Ireland, Donal Ryan chronicles the impact of the recession on a close-knit rural community.  With about twenty different points of view, the chapters are short, each a couple of pages long, and the novel is bookended by chapters from a married couple, Bobby and Triona.  Bobby is the novel’s central character, each of the other characters connected to his story in some way, but it’s hard to give a plot synopsis without giving anything away.  Suffice to say it opens with the brilliant lines “My father still lives back the road past the weir in the cottage I was reared in.  I go there every day to see is he dead and every day he lets me down.”

Though The Spinning Heart is Ryan’s debut, this is my third novel by him, and I think it’s safe to say that it’s cemented him as one of my all-time favorites.  His prose is just top-notch, lyrical and evocative, and he has a way of capturing the distinct voice of each of his narrators while still allowing his own style to creep in – I just find it so compelling and pleasurable to read any of his books.  The plot isn’t heavy in this one, though there’s a kidnapping and a murder going on in the background, but it was still hard for me to put it down.  In fact, I’d recommend reading it in as few sittings as possible, lest you begin to forget the hundred names you’re meant to be keeping track of.  Though I’d argue that if you forget who’s who a couple of times, as long as you remember who Bobby is, the impact won’t really be lessened.  This ultimately succeeds as a portrait of a community economically depressed, and is more about the overall effect that Ryan achieves with the panoply of voices, rather than the intricacies of the characters’ lives.

Anyway, as I’m sure you can tell, I loved this. Maybe not QUITE as much as I loved All We Shall Know, but it’s close.

You can pick up a copy of The Spinning Heart here on Book Depository.

14 thoughts on “book review: The Spinning Heart by Donal Ryan”