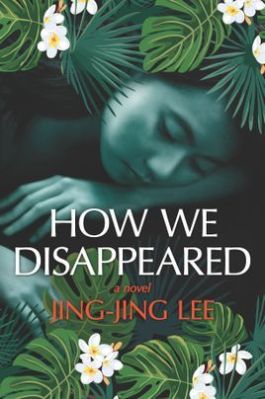 Set in Singapore, How We Disappeared centers on Wang Di, an elderly woman who survived Japanese occupation during WWII by being forced into serving as a comfort woman.  We follow her present-day narrative as well as seeing flashbacks to the war, which comprise the bulk of this novel.  Meanwhile we also follow Kevin, a teenage boy whose grandmother has just made a shocking confession on her death bed, which propels Kevin to dig into his family history.

I found this to be an occasionally frustrating and messy yet ultimately satisfying read.  Its main strength was Jing-Jing Lee’s skill at immersing the reader, and the chapters set during WWII really came to life.  I do think a bit too much of the narrative focused on Kevin – not to the detriment of Wang Di’s narrative, as I felt that her sections were properly fleshed out – it’s more that Kevin himself added very little as a character.  I tend to prefer historical fiction that doesn’t have a past/present framing, and this was no exception; I kept wishing it would stay in the 1940s.  That said, I do feel that Jing-Jing Lee ultimately justified this narrative decision with the way the story wrapped up, even if it wouldn’t have been my first choice of how to tell it.

But where I felt this book really excelled was Jing-Jing Lee’s descriptions of Wang Di’s life as a comfort woman, but then also in the depiction of the aftermath.  The shame and stigma attached to these young women after they returned home was a heartbreaking thing to reckon with, but I felt the book was strengthened by Lee’s willingness to confront this head-on.  I know that we in the book community collectively feel a bit of fatigue where WWII novels are concerned, but I felt that this one was a worthwhile read – impeccably researched and harrowing while still providing a strong and compelling narrative.  (If you’re going to read one book about sexual slavery off the Women’s Prize longlist, make it this one instead of Girl.)

You can pick up a copy of How We Disappeared here on Book Depository.

Women’s Prize 2020 reviews: Dominicana | Fleishman is in Trouble | Girl | Girl, Woman, Other | How We Disappeared | Red at the Bone | Weather

28 thoughts on “book review: How We Disappeared by Jing-Jing Lee”