This is a sort of fun, meaningless post that I always have a lot of fun with, so let’s do it!

Unlike my best and worst lists, for this post I do like to stick with books that were actually published in 2020. So, here are some of my favorite covers of the year:

What was your favorite book cover of 2020?

I’m rarely at a loss for words but Brideshead Revisited has thoroughly stumped me.  I cannot put my finger on how I feel about this book.  It took me the better part of half a year to read, so… that is certainly a point against it – but I also found it remarkable?  I think it’s worth noting that my expectations going into this book were all wrong; I neither expected nor needed this to be an explicit romance between Charles and Sebastian, but I did expect Charles’ and Sebastian’s relationship (in whatever form) to provide this novel’s framework, and I couldn’t help but to find it occasionally aimless as a result – though that isn’t really a fair criticism.  I also felt a bit “right book, wrong time” syndrome-y about this; I didn’t feel like I was in the right headspace to engage with it exactly the way it deserved (notably on a theological level).  But that said, I did find it worthwhile and certain passages quite arresting.  I think this book captures the feeling of nostalgia in a poignant and special way – it left me aching for a time that I never lived through.  I’m definitely going to want to revisit this one day when I can give it the attention it deserves.

VOTE IN THE U.S. ELECTION.

Other posts from October:

VOTE IN THE U.S. ELECTION

OUT by Natsuo Kirino
translated by Stephen Snyder
★★★☆☆
Vintage, 2005

What Out does successfully is depict the utter exhaustion and desperation of the working class (focusing on a group of women working in a boxed-lunch factory in the outskirts of Tokyo).  This book is as bleak and gritty as it gets, but I liked that; I liked that Natsuo Kirino had no interest in shying away from the horrific realities that drove these characters to make the decisions that they did.  It’s also hard to come away from this book without admiring Masako Katori, its central character; she’s a brilliant creation and a fantastic focal point.

The entire time I was reading I was planning on giving this 4 stars – 1 star deducted for Snyder’s egregiously clunky translation.  Just one example among many passages that caused me to roll my eyes into the back of my head:

So reading this was not entirely smooth sailing, but for the most part I found it admirable and compelling enough to compensate for the fact that it is not ostensibly a page-turner.

But then we got to the end, which… oh boy.  It’s hard to talk about without spoiling, but, in essence – this book starts to lead toward an inexorable conclusion, and it does arrive there, so that isn’t the issue.  The issue is how it unfolds, which… I personally found more offensive than I can even adequately describe, lol.  Ok, fine, spoiler: it involves a rape fetish that we got to experience through two (2) different perspectives in excruciating detail.  To say this served no purpose, was tonally incongruous, and bastardized Masako’s character – would all be an understatement.

I’m glad I finally read this as it’s been sitting on my shelf for years, but it also felt like a shame that I decided to pick it up for Women in Translation Month (I’m reviewing it rather belatedly) when it ended on a note that I found to be so fundamentally antifeminist it kind of cancelled out the brilliant character work that had come before.

Other posts from September:

I managed to read 4 books for my and Hannah’s readathon: Catherine House, Tokyo Ueno Station, Luster, and The Lost Village. Of course, since then I’ve also acquired (checks notes) 5 more ARCs from Netgalley, so it does feel a bit like I’m running on a hamster wheel here.

I am so sick of myself. If I don’t finish Death in Her Hands and Brideshead Revisited in October I am throwing them into the ocean.

This was a compelling read, a chilly and melancholy story about a fishing disaster and religious fanaticism in early 1600s Norway, buoyed by Millwood Hargrave’s elegant prose and deeply sympathetic characters.  The author’s attention to historical detail really shone through in her depiction of the village of Vardø, devastated by the loss of most of the male members of the community following a brutal storm; the surviving women then face yet more ruin following the arrival of Absalom Cornet, a Scottish commissioner tasked with spreading Christianity by witch-hunting suspected pagans in the community.

My reading experience with this was all over the place – it was a 5 star book that dropped to somewhere around 2 or 3 stars by the end.  For me, this book felt like it was building and building toward an explosive climax, but instead sort of fizzled out – and I don’t just mean in the final scenes, which I know some readers took issue with; for me the entire final act sort of fell flat on its face.  I don’t want to spoil anything, but partway through a romance develops which didn’t materialize in a particularly interesting way for me – I thought it would have been a stronger and more interesting book without this element.  And while I of course loved the commentary on men fearing powerful women, at times this element felt a little too on the nose.  It’s not that Millwood Hargrave’s feminist agenda did a disservice to the book – certainly to the contrary – I just would have preferred a slightly defter touch.

That said, I did mostly enjoy reading this.  I think its biggest strength was the bleak, isolated atmosphere, which Millwood Hargrave captured to perfection.  (It reminded me quite a lot of Burial Rites in that regard.) I also thought Maren and Ursa were fantastic protagonists, each with a distinctive narrative voice. So ultimately, not a new favorite like I wanted it to be, but certainly worth a read.

Last year around this time Hannah and I created a 2-person readathon to tackle some of our ARCs, and we are going to do the same this year, for the last two weeks of September.

I say it’s a 2-person readathon just because we are not planning on doing prompts or hashtags or anything that would accompany an Official readathon, but if you want to join us, by all means do! The only prompt is to read your ARCs.

I’m not going to do a set TBR because I know I won’t follow it, so I’m just going to show you all of my possibilities.

So without further ado… my ARCs. These are only the ones I’ve acquired since this time last year but I think this is more than enough to choose from.

So… what should I read?! Help!

EDIT: I’ll update this as I go.

Other posts from August:

I got an iPhone 11 Pro and the quality of my cat photos has VASTLY IMPROVED. Follow on Twitter for daily cat spam.

William Shakespeare’s name is never used in Hamnet — a conspicuous absence around which Maggie O’Farrell forms her richly imaginative narrative. Instead, the novel tells the story of those closest to Shakespeare: his parents, John and Mary; his wife Agnes; his daughter Susanna; and his twin children Hamnet and Judith. Shakespeare himself features in the narrative, though he is only ever described in relation to those around him, referred to as the Latin tutor, the husband, the father, the son. The result of this narrative decision is twofold: it pushes Shakespeare’s family to the foreground, but it also humanizes Shakespeare himself by reminding the reader that none of his works were created in a vacuum. This is the central conceit around which the novel’s climax is formed, as O’Farrell imagines the potential influence of Hamnet’s death in 1596 on Hamlet, written between 1599 and 1601.

You can read my full review HERE on BookBrowse, and you can read a piece I wrote about the real Anne Hathaway and Hamnet Shakespeare HERE.

I mean… the Complete Works of William Shakespeare will be my top ‘book’ of 2020 and you all know that.

The only two novels solidly in with a chance of making my top 10 (god I need my reading to pick up in the second half of 2020 or that top 10 is going to be so bleak) are The Glass Hotel by Emily St. John Mandel and Hamnet by Maggie O’Farrell.

Question 2 – Your favorite sequel of the year

SO MANY but toward the top of my list are these three: Real Life by Brandon Taylor (getting to attend his book tour in LA was a wonderful experience!), Luster by Raven Leilani (I don’t think this is quite out yet but I have an ARC, and I have heard NOTHING by good things), and Swimming in the Dark by Tomasz Jedrowski (I don’t have a copy yet, but it sounds ridiculously up my alley).

The Bass Rock by Evie Wyld, The Harpy by Megan Hunter, and Snow by John Banville.

Question 6 – Biggest surprise of the year

Tender is the Flesh by Agustina Bazterrica – surprising in every sense of the word.

But honorable mentions to Kim Jiyoung, Born 1982 which I expected to like in a lukewarm 3.5-4 star kind of way but which I was actually blown away by, and Hysteria by Jessica Gross – another legitimately shocking read.

Question 7 – Favourite new to you or debut author

T Kira Madden, Kate Elizabeth Russell, and Naoise Dolan are all authors I’d love to read more by (and Jessica Gross, from the last question).

Constance from King John.  Getting to play her on Zoom has been one of my absolute highlights of the year.  She’s fierce, savvy, prideful, intelligent, and is the absolute heart and soul of this play – despite the fact that she has NO political power she sets the whole thing in motion and then is the one to most acutely suffer the consequences and has some of the most heart-rending monologues in all of Shakespeare (“grief fills the room up of my absent child”).  Also, THIS!!! 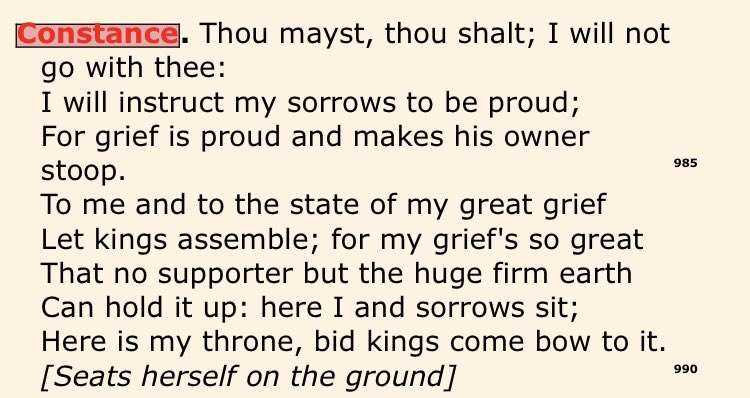 Question 10 – A book that made you cry

Hm, none so far.  But if I had a heart I would have cried at Traveling in a Strange Land by David Park.

Question 11 – A book that made you happy

Rereading If We Were Villains was probably the most fun reading experience I’ve had all year, in light of my own newfound Shakespeare thing.

Lady Macbeth, directed by William Oldroyd and starring Florence Pugh.  Contrary to popular belief this is not an adaptation of Macbeth – it’s an adaptation of a Russian novella inspired by Macbeth; Lady Macbeth of the Mtsensk District by Nikolai Leskov.  I haven’t read the novella in question, though I’d like to; but I was really blown away by the film (despite some questionable racial optics…).

Daughter from the Dark by Marina & Sergey Dyachenko, translated by Julia Hersey.

Other than the rest of Shakespeare’s plays?  Hopefully A Thousand Ships by Natalie Haynes and the Cromwell trilogy by Hillary Mantel to round out my (shitty) Women’s Prize reading for the year.

My Tweets
Back to top
pace, amore, libri
Blog at WordPress.com.