So, even though I had The Lesser Bohemians on my ‘currently reading’ shelf for over three months, I actually read the bulk of it in the last two days. I think I read the first 75 pages or something and then found myself unable to read this concurrently with War and Peace, so it got put aside for a few months. But even so, this is the longest it’s taken me to read a book all year – and it’s only 310 pages. So, why the delay?

Down down I down to the last flakes in. Dreaming for hours I think in my dream. Over over. Day white tongue teeth. Quickness and slowness. Stilts pander to streets and their up down their. I don’t know what I’ve yet. Wander where no notion wanders in amongst the dust of. Devil may Slip. Then wake up.

Because the whole thing is written like this. I won’t lie – this book is challenging and draining.

But interestingly, the style of prose isn’t what ultimately hurt this for me. Once I got into the rhythm of it, it became easier (reading a few lines out loud every now and then helped), and I sort of vacillated between thinking it was pretentious gibberish, and thinking this Joycean stream of consciousness was actually a very profound and striking means of storytelling. I don’t know, I still haven’t made up my mind.

But my main problem with this book is the story itself, which is basically two highly melodramatic people having a lot of sex. 18-year-old Eilis meets 39-year-old Stephen, and we chronicle their dysfunctional liaison with a heightened pathos verging on absurdity. On the one hand, I sort of admire how Eimear McBride was able to make the stakes of this story feel so high when all that was really at stake was an unhealthy train wreck of a relationship; on the other hand, it got to be somewhat tedious. But I’d be lying if I said I wasn’t wholly captivated by this affair from time to time, against my better judgement.

What frustrates me about this novel is that even though it’s told from Eilis’ point of view, I think Stephen’s story is the one that McBride really wanted to tell. His backstory was unexpected harrowing, more twisted and disturbing than I had possibly imaged. But the more he tells his story, the more Eilis fades. Her whole life and existence becomes about Stephen, and the novel that starts as Eilis’s sexual bildungsroman ultimately casts Eilis in a rather inconsequential role. I was left feeling dissatisfied with her character’s journey, which is frustrating when essentially all your novel has to offer in the first place is characterization.

I didn’t hate it, though, even though I wanted to, for the most part. There was something undeniably stimulating and compelling about this book. I’m tentatively intrigued by McBride’s style and I’m curious about her debut, A Girl Is a Half-formed Thing. But I would not recommend reading this author lightly – I’d only suggest picking up The Lesser Bohemians if you’re up for a challenge and a bit of weirdness, and more than a fair share of sex scenes.

Thanks to Blogging for Books, Hogarth Press, and Eimear McBride for the copy provided in exchange for an honest review. 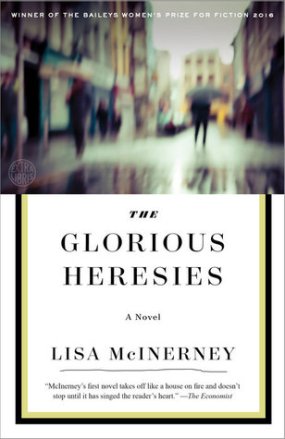 I hold onto her and tell her I love her and tell her I’ll do anything she wants me to do but beyond my words and her weight in my arms there’s the knowing we fucked this up. There was something beautiful here once.

This is one of the most hard-hitting and thematically rich books I’ve read in a long time. There’s so much to unpack here, I’m not quite sure where to begin.

The Glorious Heresies centers around five characters: fifteen-year-old drug dealer Ryan and his alcoholic father Tony, grandmother Maureen and her gangster son Jimmy, and a prostitute named Georgie. The way these characters relate to one another is complicated, tangled. They weave in and out of each other’s lives, implicitly connected by a single act that occurs in the first chapter: Maureen discovers an intruder in her home, and, startled, she hits him over the head, killing him. The consequences of this unplanned murder unfold over the course of the novel, which spans several years, in the city of Cork.

Lisa McInerney’s debut novel is an unflinching examination of the cycle of poverty that drives crime in modern day Ireland. This book not only explores the complex web of social dynamics that breeds crime and corruption, but pays particular attention to the way this is manifested across generations. Is someone truly responsible for the way they raise their children, if they too were a victim of society’s moral and structural failings? Where and how does the cycle end? These are the questions McInerney raises while examining this group of broken individuals living on the fringes of society. Crime and religion are so heavily intertwined in these pages it’s hard to know where one ends and the other begins, as McInerney fearlessly dissects these themes as thoroughly as possible in this not-quite-400 page novel.

The Glorious Heresies is bleak and profane and at times quite depressing. But it’s also darkly comedic and hopeful. McInerney’s intelligent prose is laced with Irish slang that makes this a visceral and immersive reading experience, in a novel which is layered with complex characters who are each in their own way seeking retribution. It’s honestly one of the most striking things I’ve read in a while. I know I won’t stop thinking about this any time soon.

Thank you Blogging for Books and Penguin Random House for the opportunity to read a copy of this book in exchange for an honest review.