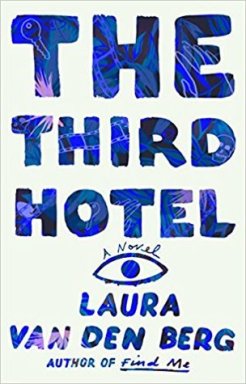 The Third Hotel follows a newly widowed woman named Clare, trying to come to terms with the death of her husband and the illness of her father, while attending a film festival in Cuba. One day in Havana she thinks she sees her husband standing outside a museum and she decides to follow him. Much surrealism and existential angst ensues.

I think my biggest issue with The Third Hotel was that I did not feel the slightest emotional connection to this story. I really don’t need to feel an emotional pull to every single thing I read – I am happy for something to appeal to me on a more intellectual level if that’s what the author is trying to achieve – but when a book is about something as intensely personal as grief, I want to feel… something? Sad or unsettled or moved in some way? Anything other than bored.

But this book’s darkly sardonic and disaffected tone just left me cold, and didn’t give me enough to chew on that I put it down feeling intellectually stimulated enough to compensate for the emotional hollowness. Laura van den Berg certainly has some interesting ideas, but unfortunately none of them are developed past their infancy. The ruminations on the role of the traveler and the tension between the internal and external selves in particular had the potential to be intriguing – and I also liked the commentary on horror films – but I’m sorry to say that for the most part this was just tedious and lacking in focus.